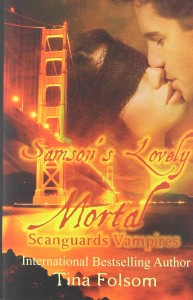 Vampire bachelor Samson can’t get it up anymore. Not even his shrink can help him. That changes when the lovely mortal auditor Delilah tumbles into his arms after a seemingly random attack. Suddenly there’s nothing wrong with his hydraulics – that is, as long as Delilah is the woman in his arms.

His scruples about taking Delilah to bed vanish when his shrink suggests it’s the only way to cure his problem. Thinking all he needs is one night with her, Samson indulges in a night of pleasure and passion.

However, another attack on Delilah and a dead body later, and Samson has his hands full: not only with trying to hide the fact he’s a vampire, but also with finding out what secrets Delilah harbors for somebody to want her harm.

“I’m addicted to Tina Folsom’s books! The Scanguards series is one of the hottest things to happen to vampire romance. If you love scorching, fast-paced reads, don’t miss this thrilling series!” — Lara Adrian, New York Times Bestselling Author of the Midnight Breed series

Tina writes about hot alpha heroes, bad boys, and kick-ass heroines. Fast-paced plots and steamy scenes are her specialty. She loves vampires and the concept of immortality, and now also writes contemporary romance and has launched the Eternal Bachelors Club series.

Tina is a one-women-enterprise. She writes constantly and translates her own books into German, her native language. Her books are available in e-book format, as paperbacks, as audio books, and in foreign languages.

Tina Folsom was born in Germany and has been living in English speaking countries for over 25 years, the last 13 of them in San Francisco, where she’s married to an American. Tina has always been a bit of a globe trotter: after living in Lausanne, Switzerland, she briefly worked on a cruise ship in the Mediterranean, then lived a year in Munich, before moving to London. There, she became an accountant. But after 8 years she decided to move overseas.

In New York she studied drama at the American Academy of Dramatic Arts then moved to Los Angeles a year later to pursue studies in screenwriting. In 2008 she wrote her first romance. She now has 18 novels in English and dozens in other languages.

“My first thought when I finished this book was, Wow! That was awesome! My next thought was, Damn, there better be another book …” –Indie Paranormal Book Reviews – indieparanormalbooksreviews.blogspot.com/

This is the first book I’ve read by Ms. Folsom and I had no idea whether I would like it or not when I purchased it. The idea of a vampire alpha male with erectile dysfunction intrigued me, particularly in an erotic novel. The book was not what I expected. It was interesting. I enjoyed the world Ms. Folsom created very much. Her characters had a depth to them that was surprising for a light read. Samson and Delilah (corny choice of names but I got used to it) were a very well matched pair. They had good chemistry and were well developed, although they could have been developed more thoroughly. The secondary characters were just as interesting, particularly Amaury who I never thought I would like but came out sympathetic in the end.