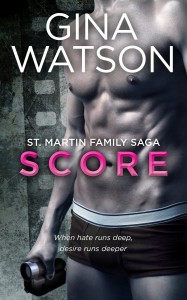 He was handsome, sexy, confident, and a complete bastard.
So what was she doing in his bed? Hadn’t he proved to her again and again that all he was good for was bringing her pain. To be fair, last night she’d felt no pain, only pleasure.
Caleb sensed the warm naked body in bed next to him. He knew it was Chloe but what he couldn’t figure out was why. He’d grown up next door to her, had teased her relentlessly. And she’d hated him for it. Memories from last night of the curves she’d grown into had his mouth going dry. He’d had no words with which to tease, all he could do was moan.

Had Chloe actually had sex with a man she’d hated for a decade? A full percussion section was banging in Chloe’s head as the memories came to her in pieces . . . martinis, dancing, his hands, his hardness. God, he’d been solid male muscle. This can’t be happening. Hadn’t she made a commitment to herself to settle the score with Caleb if given the chance? Instead, she was right back where she was all those years ago, panting after him in all of his unobtainable glory.

˃˃˃ One night was all it took for Caleb to fall completely head over heals in love with little Chloe Mills from next door.
Had he loved her all this time? He thought maybe he had. There was just one tiny problem . . . Chloe hated his guts.

˃˃˃ Will their obvious sexual attraction be enough to cut through years of hate?
˃˃˃ To spread awareness for ALS this book is free.
In the book, Chloe is a speech language pathologist. She has a patient with ALS who is also a friend of the family. Follow her in her quest to increase his quality of life through the use of communication boards. Read how Chloe and Cal must work together to complete a video for the family before it’s too late.

About the Author
I lead a double life. By day I’m training young women to become speech therapists. At night I sip red wine, dial down all distractions, and sink into the fictional worlds I create. Good tunes on my iPod are a must. I get so caught up in my characters that I truly wish the male hero would materialize in the flesh; especially when I see the cover image…I swoon. I have spent the past several years working as a university instructor. My students are young adult females so I’m constantly running plot lines and book covers by them. They make a great beta team! I love my job at the university but there is something I love even more. . . romance novels. I’ll read any genre as long as there are steamy sex scenes and the standard issue HEA ending. Initially I was drawn in by the escape and sweeping emotion of it all, so much so, I began to create my own fictional world. Since I worked during the day my nights were consumed with writing. I was powerless to stop the stories that wanted to be freed from my mind. I actually started to get mixed up. I would think something I wrote at night was something I had said during the working day and vice versa. My friends were worried for my sanity but I assured them I had not gone mad, I was just writing. Once I started I wrote upwards of 3,000 words per day. It was in the early millennium when I became brave enough to share my stories with others. I began to post my stories on fiction websites and then something marvelous happened—I was followed by hundreds of eager readers. I loved my followers and their kind words helped motivate me. These days I am writing books and I’ve learned some things about myself during the process. I like to write series novels because I have trouble letting go. I like a little plot with my romance, erotica, contemporary. Call it what you will, but I have to have a good story in which to sink my teeth. If I start writing a story I have to finish it, even if it’s terrible. My dog is my muse and when he tilts his forehead at me and blinks his large black eyes questioningly at me, I think he is worried I’ve been sucked into the wormhole of the very fiction that I write. I appreciate his concern but I have yet to fall down the rabbit hole. Here’s to everyone else in my boat, may our voyage become a permanent destination.

REVIEW:
Gina Watson did not disappoint with this book! I loved Chloe and Chace’s story. It was super, super hot and very, very sweet! What a combination! Chloe and Chace have known each other forever – but like typical boys, when they like someone and don’t know how to handle their emotions, they act like butts. Well, Chace always acted like a butt around Chloe basically their whole lives together and she has always loved him – but she felt like her feelings for him were hopeless and decided to forget her feelings and dreams and move on. But things changed quickly after a Vegas trip and Chace decided that Chloe is meant for him and he just has to figure out how to convince her of that.