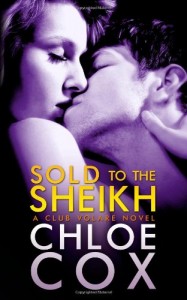 SOLD TO THE SHEIKH is an emotional, steamy romance about finding a way to move on after heartbreak and love again. It contains mature themes and content perfect for fans of the Crossfire series and Fifty Shades of Grey, and at least one thing you should *not* try at home without a whole lot of practice first…

Stella Spencer is grateful for any job she can get after her divorce, even if it’s at her friend’s exclusive club. And Club Volare proves the perfect place to hide while she mends a shattered heart–until she interrupts an auction scene, and the powerful Sheikh Bashir al Aziz bin Said decides that Stella is the woman that he wants. Not in a million years would Stella consider selling herself to anyone, for any reason, not even for a game–but the Sheikh, all muscular six feet of him, is not a man who takes no for an answer. And when he touches her… Stella’s never felt anything like it.

At Club Volare for one last wild weekend before his family requires him to settle down, Sheikh Bashir doesn’t expect to find a woman he can trust, or a woman who challenges him. Stella Spencer is a challenge, all right: both vulnerable and guarded, beautiful and insecure, and a closet submissive. And Bashir is drawn to her in a way he can’t quite explain–only he’s convinced she’s hiding something, and Bashir has reasons for not trusting the women in his life. But Stella Spencer has a hold on him like nothing he’s ever experienced, and Sheikh Bashir knows he must have her.

Stella is afraid to open her heart to love again after the way she’s been hurt, but Sheikh Bashir wants to be the Dom to show her who she truly is–and Sheikh Bashir always gets what he wants.

SOLD TO THE SHEIKH is approximately 55,000 words, or about 220 traditional print pages.

Other Club Volare books available here: smarturl.it/ClubVolare
SOLD TO THE SHEIKH
TIED TO THE TYCOON
DISCIPLINED BY THE DOM
Product Details
Paperback: 272 pages
Publisher: CreateSpace Independent Publishing Platform (October 21, 2012)
Language: English
ISBN-10: 1480153443
ISBN-13: 978-1480153448
About The Author
Chloe Cox is the USA Today bestselling author of the Club Volare series of erotic romances. She’s having WAY too much fun, has an overactive imagination, and loves writing about all of it. Sign up for her new releases list at http://smarturl.it/WFNewReleases to hear about her books as soon as they come out. And if you’re a Facebook or Goodreads kinda person, come say hi!

REVIEW:
Chloe Cox has done it again!! I fell in love with the hero. This a sweet, compelling love story taking place mostly within the confines of Club Volare. The story is well-developed and takes precedence over the sex, even though the sex is hot. I want a sequel with these two!! I know she is working on more Club Volare stories and hopefully both Bashir and Stella will be mentioned. Be prepared to read this is in one sitting! You will not be able to put it down. I have never before commented on a cover. This cover though is beautifully done and after reading the book, I found it to be even more beautiful. Looking forward to more Club Volare!!