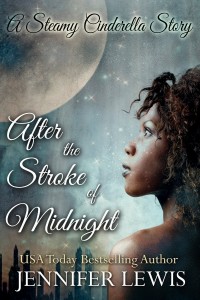 Sandy Riley dreams of an escape from her humdrum nights making sales calls in a cubicle farm. When a co-worker hands her the winning ticket to a night on the town with one of New York’s most eligible bachelors, she can’t say no. One problem: her handsome date is the company’s charismatic CEO. Since she can’t risk losing her job, all must end before her nightshift begins, and he can never learn her true identity—or the secrets of her past.

Marco Danieli is intrigued by the beautiful woman who stirs his blood… then disappears into the night. When he tracks her down he thinks his problems are solved—but they’re only just beginning…

Excerpt:
The tempo quickened. Whether it was the music that came first or the heightened pace of their twin heartbeats, Sandy couldn’t say. All she knew was suddenly they were whirling across the dance floor, turning, twisting, groping and grabbing at each other.
Their legs stepped this way and that, weaving in and out of each other in a tango of impossible passion. Their bodies itched to touch each other, impatient of the clothes that kept skin from skin.
When their lips met the world exploded into a crescendo of stars, coupled with a clash of cymbals, as emotion and passion climaxed in the melding of their mouths.
Her tongue hungrily sought his. They clutched each other and their feet stopped moving as they gave themselves over completely to the soul-stirring magic of their kiss.
Marco’s mouth moved over hers, greedy for it, tasting and possessing her. Her hands gripped the sides of his face, holding him close. Her nose brushed against his, changing sides with it, changing back, as each sought to deepen the kiss, to make it more than any kiss could be.
At that moment the music stopped and the room burst into applause.

About the Author
Jennifer Lewis grew up in England where she enjoyed a steady diet of fairy tales—some of them quite unsuitable for children—from an early age. She is a USA TODAY bestselling author of more than thirty books and her stories have been translated into more than twenty languages. A New Yorker for many years, she now lives in sunny South Florida and when she’s not sitting at her laptop she can often be found at the beach. Read more about her books and join her new release mailing list at www.jenlewis.com.

REvIEW:
The journey of Marco and Sandy had me spellbound as it took hold of my emotions and led me from one end of the spectrum to the other. I waited for the twists and turns which never failed to heighten my delight with the story. I know fear and I felt the characters as they would attempt to gather the meaning of love. Have you ever wanted something but you did not know the path to take to reach your destination? This tale embraced those moments where you want to retreat because it is too much to imagine that you could be blessed with such a love. Life mistakes can sometimes hinder your vision but it is so wonderful when true love triumphs. Take the time to read this story and open your heart and mind to life impossibilities.