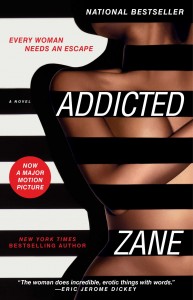 Before there was E.L. James’s 50 Shades of Grey, there was Zane’s Addicted. Once described as “the hottest paperback in the country” by the New York Times and now a major motion picture distributed by Lionsgate, this wildly popular novel by the Queen of Erotica follows one woman’s life as it spirals out of control when her three extramarital affairs lead her down a dark and twisted path.

For successful African-American businesswoman Zoe Reynard, finding the pleasure she wants, the way she wants it, is not worth the risk of losing everything she has: marriage to the man she has loved since childhood, a thriving company, and three wonderful children. But Zoe feels helpless in the grip of an overpowering addiction…to sex.

Finding a compassionate woman therapist to help her, Zoe finally summons the courage to tell her torrid story, a tale of guilt and desire as shocking as it is compelling. From the sensitive artist with whom she spends stolen hours on rumpled sheets to the rough and violent man who draws her toward destruction, Zoe is a woman desperately searching for fulfillment—and something darker, deeper, and perhaps deadly. As her life spins out of control and her sexual escapades carry her toward a dangerous choice, Zoe is racing against time to uncover the source of her “fatal attraction”—as chilling secrets tumble forth from the recesses of a woman’s mind, and perilous temptations lead toward a climax that can threaten her sanity, her marriage…and her life.

About the Author
Zane is the New York Times bestselling author of Afterburn, The Heat Seekers, Dear G-Spot, Gettin’ Buck Wild, The Hot Box, Total Eclipse of the Heart, Nervous, Skyscraper, Love is Never Painless, Shame on It All, and The Sisters of APF; the ebook short stories I’ll be Home for Christmas and Everything Fades Away; and editor for the Flava anthology series, including Z-Rated and Busy Bodies. Her TV series, Zane’s Sex Chronicles, and The Jump Off are featured on Cinemax, and her bestselling novel Addicted is a major motion picture with Lionsgate Films. She is the publisher of Strebor Books, an imprint of Atria Books/Simon & Schuster, and lives in the Washington, DC, area with her family. Visit her online at EroticaNoir.com.

REVIEW:
Initially, I had no idea what to expect when I first sat down to read Addicted. For months, I heard countless praises of Zane’s second novel. Naturally, I felt that I would be let down and that all the hype would be about nothing. Boy, was I wrong! I was Addicted to Addicted from page one.
To me, this book is not about erotica but about the power of love to overcome all obstacles. Meet Zoe, a woman who has it all, beautiful children, home, husband and a thriving career. Yet deep down her life is not what it appears and starts falling apart at the seams. In her quest to overcome her illness (sexual addiction) she begins to seek help. Thanks to Zane, she gives her character depth and allows us to see Zoe’s vulnerability, which helps you to not view her as loose, but a woman in need of guidance.

Throughout this novel, you witness Zoe embark on a path of self-destruction, but never losing sight on what matters most to her, her family. It is that love of her family, that forces her to seek therapy. That love that makes her take a long hard look at herself and God forbid a glimpse into her past, where all the dark hidden secrets of yesteryear are revealed. In the interim, it also forces Zoe to come clean with her husband about her double life. I immediately thought Jason would run for the hills, but instead he stood by her, and together they uncovered things that enable both of them to move forward. This book is packed with mystery, suspense and yes steamy hot sex scenes that leave you breathless. However, its so much more, its about truth, love and more importantly, forgiveness. It also forces you to look at things beyond the surface, and realize that people are not always who they appear to be. I highly recommend this book to anyone, but fasten your seatbelt as Zane takes you on a roller coaster ride.

Zane has a wonderful creative mind, and I look forward to following her career. She did an EXCEPTIONAL job with Addicted. Thanks for sharing with the world, that it is by choice that we choose to remain a hostage to our fears and that its okay to reach out for help.