Everything about him warned me to stay away.

I’d seen bad boys before, but he had it all and more. The rippling muscles covered in tatts, the piercing eyes hiding dark secrets, the silky voice that could make a girl come with just a whisper . . .

He was exactly the type of guy that would get me in trouble, but when he jumped off the stage, inked skin glistening with sweat and breathed his seductive words into my ear, I couldn’t resist the temptation.

It was supposed to be the best one-night stand of my life, but fate didn’t let it play out that way. Things happened. I got upset. I got hasty. And worst of all, I got reckless.

After that disaster, I thought it was the last I’d see of him. But what I didn’t know was that I’d started something.

Something that could shatter the very thing I had worked so hard to protect.

REVIEW:
This is not a standalone novel. The second part is scheduled to be released Fall 2014.

When you first meet Jax and Riley, you realize that neither of these characters is going to be boring. I loved that they both gave as well as they got with their taunting and snarkiness. Their verbal banter leads to physical foreplay and even then they’re still tying to out do one another. It’s a bit of a game and it is laugh out loud funny at times.

It’s not until one of them shows a vulnerability that their relationship grows toward something genuine. It’s then that the intensity of their passion is truly felt. Their dynamic together works on so many levels but you can feel that they’re both nervous about fully committing themselves to anyone. Jax is clearly holding onto some serious baggage from his childhood and Riley’s past isn’t free of emotional drama either. In the last few chapters, the two give more of themselves and in doing so their story leads up to a highly dramatic ending.

I appreciated that most of Jax and Riley’s secrets are revealed and that the book ended how it did. Sometimes authors can leave readers with a horrible cliffhanger but that isn’t the case with Reckless. I am already anticipating the conclusion of their story – I am sure I will be completely surprised and blown away by the storyline Priscilla West has planned for the two, as I am with all of her books.

I truly enjoyed this book – it’s a highly entertaining read and I would recommend it. 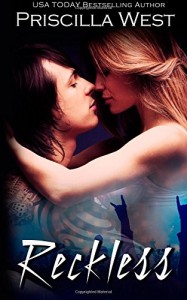