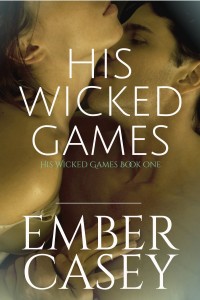 Trapped with a billionaire in his mysterious mansion… Can she beat him at his own game?

Lily Frazer would do anything to save the Frazer Center for the Arts–even take on the infamous billionaire Calder Cunningham. When Lily breaks onto the Cunningham estate, she only wants to find and reason with Calder. (All right, all right, she wants to punch him in the face, too, but that’s Plan B.) As it turns out, the arrogant billionaire is willing to give her the money he promised, but there’s a catch: she must win it from him.

And the games he has in mind aren’t exactly… innocent.

Lily isn’t about to give up the money without a fight (or let some haughty bastard seduce her), but she quickly discovers that there might be more to the brooding Calder than she initially perceived. As their games of cat and mouse become increasingly intense, she suddenly finds herself confused by her own emotions. Can she deny her attraction long enough to win the money she needs?

A contemporary, steamy take on Beauty and the Beast, His Wicked Games is a tale of devilish deeds, wild passions, and wicked romance.

HER WICKED HEART SERIES (all available!)
(spin-off series)
Book 1 – Her Wicked Heart
Book 1.5 – Take You Away
Book 2 – Lost and Found

REVIEW
“I’ve never been this reckless before, but I think it agrees with me. I know I’m being insane, but I don’t care. I’ve come to save the Center, and there’s no turning back now. Calder Cunningham won’t even know what hit him.”

Lily Frazer and her father own a small non-profit called The Frazer Center for the Arts. They rely on donations to run their operations, which gives a place for disadvantaged youth to spend time after school doing various activities until their parents pick them up.

The Frazer’s have always relied on a substantial donation from the Cunningham family. However, now that Wentworth Cunningham has died, all business has fallen into the hands of his son, Calder.

Calder is a rich playboy who is used to spending his time traveling and living a carefree life. You can find him on the arm of the most beautiful women in the world at any time. Since his father has passed away, he is forced to come home and take responsibility for his affairs.

Lily receives a letter from Calder letting her know that his family will not be able to keep their contract in the future and that it would be in her best interest to not waste her time pursuing the funds any longer. Lily is not okay with that at all. The Frazer Center desperately needs that money. So she takes it upon herself to go have a chat with the man himself. When she arrives at the mansion no one will answer her at the intercom, no one will open the gates, and there are no security guards either. She thinks up quite interesting ways to get someones attention but nothing works. At her wits end, she decides to crawl through the gate!

Calder catches Lily and the game of cat and mouse begins. You can feel the attraction right from the start. It’s intense and hot and you may need your boyfriend or B.O.B. nearby after a few of the interactions. Ember Casey knows how to turn it up, let me tell you.

“There comes a point sometimes in arguments when you know you’ve lost. When your pride and your anger have backed you into a corner and a sensible person would throw up their hands and walk away. I’d like to think that I’m normally a sensible person, but the past few days have left me with a confusing jumble of emotions.”

Lily finds herself stuck at the mansion due to a rain storm that has flooded all the roads. All this leads to is more time alone with Calder. More time to convince herself that she doesn’t like him. All those thoughts flee from her mind once Calder touches her. She can’t deny that she see’s the goodness in him and tries to convince herself that they are just having a bit of weekend fun.

When the truth comes out about why Calder isn’t willing to give the money to Lily for the Center all hell breaks loose.

I loved this book so much. The attraction, the exhibitionism, the games, and yummy Calder. There isn’t a cliffhanger but there is a sequel coming out to continue Lily and Calder’s story called Truth or Dare.